Lady of Shalott: Keeping the Lady

Towers are ambiguous structures. The keep, or tower, holds people in and out. Towers are bulwarks against what is outside: the chaos of nature, marauders, and things that go bump in the night. Towers protect the outside from what is locked within: the prisoner, the crazy woman, the hunchback. They are spires rising to God, symbol of male sexuality, and sanctuary for hermits, saints, and damsels.

In Tennyson’s “The Lady of Shalott” and “Lancelot and Elaine” (from The Idylls of the King) towers are, unsurprisingly, ambiguous structures. There are the bulwarks of “many tower’d Camelot,” the defences for the court. A tower is refuge and chamber for Elaine of Astolat. In her tower, she guards Lancelot’s shield, creates the elaborate silk case for it, and pines away with unrequited love for the knight. The Lady of Shalott lives and works in her tower, and, depending on how one interprets the poem, it keeps her in, either to protect her from the outside world or to protect the society of Camelot from her. 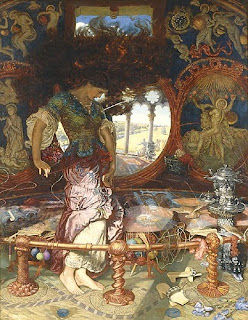 It is likely that Tennyson added the detail of the tower for both of his damsels. The source for “Lancelot and Elaine” is Malory’s The Morte Darthur; for “The Lady of Shalott,” it is La Donna di Scalotta, an Italian work from the thirteenth century. The source for the story of Elaine of Astolat/Scalotta in both Malory and the Italian work is the early thirteenth-century Mort Artu. Malory’s work is a close paraphrase of the earlier French work, and there is no tower for Elaine in Malory. That suggests that there is also no tower in Tennyson’s Italian source for “The Lady of Shallot.”

It’s an important point because of the sheer number of isolating features, all created by Tennyson for the Lady. He has acknowledged that the island, mirror, and web are his inventions (Marshall 59). Add the tower, and the Lady’s security is indeed tight. She is on an island, in a tower, able to see the outside world only in a mirror. In case this is not enough, there is a curse which keeps her in place.

The poem is more about keeping the Lady in, unable to damage society, which fits with a thread that runs through many Arthurian tales. In Sir Gawain and the Green Knight, in Malory’s The Morte Darthur, and, notably, in Tennyson’s The Idylls of the King, there are ideological threats to the idealized world of Camelot, threats to the fundamentals of the chivalric code. They are fertility, faerie, art and artifice, and fate, the older Celtic elements, seen in the shape-shifting Green Knight, Merlin, and Morgan Le Fay. Additionally, women, especially outside of the marriage contract – legitimately or otherwise – are always a threat to the idealized fellowship of the knights.

In Sir Gawain and the Green Knight, Celtic game and artifice expose not only the possibility of too much pride in Arthur’s court, but the impossibility of upholding the chivalric code in its entirety, including the rules for courtly love.

In Malory’s The Morte Darthur, Arthur insists on burning Guinevere for her infidelity. He says that he may have queens aplenty, but such a fellowship of good knights will not happen again (Malory 114). Only marriage and the appearance of fidelity can contain and control the disruptive force of women in the world of Camelot. When the system fails, or fails publicly, the woman must be punished and removed to preserve the system. Guinevere escapes burning mostly because of Gawain’s pleas on her behalf.

In Tennyson’s The Idylls of the King, Guinevere is a jealous shrew, much worse than Lancelot who may be guilty of dire insensitivity, but not infidelity. Both Elaine and Guinevere are disruptive, unpleasant elements in the ideal world of the noble king and his knights.

The Lady of Shalott comprises all the elements most threatening to the world of Camelot. Her tower, on an island, in a river, keeps her isolated and away from the highly idealized world of the knights and their ladies in Camelot. Her escape can only end with her death, for she is the triple-fold threat that leads to the break-up of the fellowship of the Knights of the Round Table.

Not surprisingly, the Lady of Shalott comprises many of the elements most threatening to Victorian society, at least to appearances in the male-dominated public sphere. Relegated to the private sphere, her mystery and sexuality are controlled. She cannot be an artist; weaving and embroidery become merely household arts. 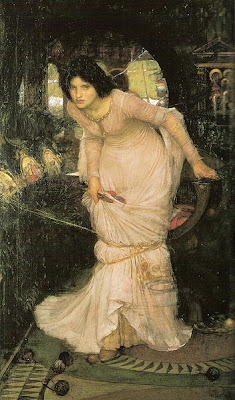 The home is the Victorian equivalent of the Lady of Shalott’s tower. The husband is the mirror, the Victorian woman’s only access to the outside world. The lady’s arts are not creative, only mimetic.

Canadian Loreena McKennitt has written a beautiful song version of “The Lady of Shalott” which is nearly verbatim. The visuals in this video are beautiful.

Many thanks for this guest blog, written by
ChrisJ
At My Soiree

She comprises many of the elements most threatening to Victorian society, at least to appearances in the male-dominated public sphere. Relegated to the private sphere, her mystery and sexuality are controlled.

wow.. tough stuff. Did Tennyson have trouble with his mother, sister or wife? Maybe he was reflecting what he thought was male opinion in his time, but how can a reader tell?

Yikes, I don't claim to know what was in Tennyson's mind! The ideas about women and their role were very predominant and contested in society at the time, and he (like any other person) was certainly not immune to the discussions surrounding him, nor was he uninfluenced by his culture.

The words on the page suggest certain things; whether the writer intended exactly what we make of them is most always an unknown, but we still speculate.

I love those paintings, specially Waterhouses.