The latter C17th was the heyday of the Covent Garden coffee-houses, the best known being Wills in Great Russell St. Wills achieved great fame when it became the haunt of London's lit­erati, with the poet John Dryden being the resident man of letters. For 30 years, Dryden ser­ved as an inspiration to literary men in Lon­don: including Pepys and Pope, but not Jonathan Swift who apparently dis­liked Wills. In add­it­ion to ser­ious discussion of lit­erature, Dryden did satirical entertainment for the other patrons.

Coffee houses located in Westminster were frequented by polit­icians. Co­ffee houses near St Paul's Cathed­ral were loved by clergy and intellectuals who gathered to discuss theology and philo­sophy. But there were two great problems with the coffee houses. Firstly they were most suited to day time, intellectual activities, and were rather unsuited to night time, social activities. And secondly the so­cial code of the period excluded women from coffee-houses. [Later in the C18th, cof­fee houses declined but that was because regular gent­lemen's clubs arose in their stead, offering better facil­ities].

Which were Britain’s first Pleasure Gardens? The New Springs Gardens (later Vauxhall), south of the Thames, were probably opened in 1660, in perfect time to cele­b­rate the restoration of the monarchy. Admis­sion was free in the early years, with food and drink being sold to support the venture. There was one compulsory cost; the gardens could only be reached by water via a 6d boat ride, at least until West­min­s­t­er Bridge was built later on.

The new entertainment centres took hold in the public imagination very quickly and within a year or two, Samuel Pepys was already charm­ed by pleasure gardens in his diary. A very pleas­ant evening of danc­ing, strolling & watching fireworks, said he, would end with tea.

In 1729 merchant Jonathan Tyers bought the Vauxhall Gardens, built supper boxes, painted blinds and raised thousands of lamps.  In a rotunda designed by James Paine, an orchestra performed new pieces. The Gardens were central to the dissemination of Rococo in the public fancy, gentle and romantic. 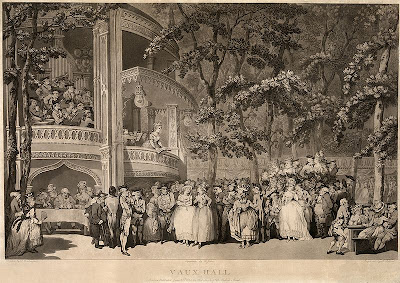 The fashions at Vauxhall, by Thomas Rowlandson, 1779

The pleasure gardens of Ranelagh, in Chelsea, also opened for private pleasure in the C17th. But it wasn’t until 1741 that Ranelagh’s house and grounds were purchased by a group headed by owner of the Theatre Royal Drury Lane and subsequently opened to the pub­lic.

Early American Gardens blog was a fine source of inform­ation about British pleasure gardens. Considered more fashion­able than Vauxhall, and with a more expensive entrance fee, Ranelagh was influent­ial, introd­ucing the masquerade to the new middle class. Like Vaux­hall, Ranelagh was in the Rocco style, and featured an impressive rotunda and a Chinese pavilion as well as several walks and a lake. More than Vauxhall, it had a reputation for being a convenient and popular place for courtship and romantic assignations. But Vauxhall had tightrope walkers, hot air balloon ascents, fireworks and a totally modern rococo Turkish tent. 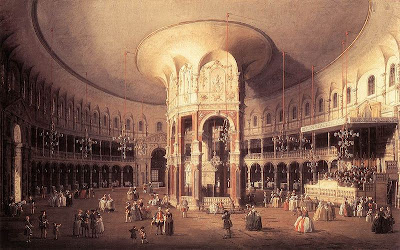 The rotunda and Ranelagh, by Canaletto, 1754

Ranelagh featured a circle of boxes in the rotunda interior, as you can see in the Canaletto painting, which was decorated with paint­ings and lamps. Above the first level, another tier of boxes could seat 8 people and were lit by a circle of 60 upper level wind­ows. The centre was discovered to be poor placement for the orchestra, and so from the beginning was used instead as a fireplace for cool even­ings. The Rotunda at Ranelagh Gardens was always an important venue for musical concerts, so it was a terrible shame when the rotunda was finally closed in 1803 and soon demolished.

George Frideric Handel might have been born German, but his works flourished in Brit­ain. In 1738 the whole of cultivated London flocked to New Springs, by now called Vauxhall Pleasure Gardens, to ad­mire a statue erected to their beloved compos­er. His greatest works, written in the 1730s-40s, were triumph­antly acclaimed in Ox­ford, London and Dublin eg Esther, Messiah, Zadok the Priest.

Huge crowds could be accommodated at Vauxhall. In 1749 a rehearsal of Handel's Music for the Royal Fireworks attracted 12,000 very well dressed citizens. Many of the best known musicians and singers of the day performed at the Gardens. Social life was very pleasant for the nobility and the gen­try; the pleasure gardens in London provided the same pleas­ant walks and amusements as the Tivoli Gardens did for Copenhagen.


A French visitor (published in The Gentleman's Magazine 1742) raved. He noted in particular a magnificent orchestra that rose to the roof, from which hung several large branches holding thousands of candles enclosed in crystal-glasses, to light and adorn the spacious rotunda. Behind a handsome banqueting room, he said, a pavilion beggared all description, noble in design and elegant in its decorations.


Regency Reader blog suggested that cheap admission and accessibility by a burgeoning middle class made Vauxhall a hot spot during the Regency era. Fountains, cascades and walkways were illum­inated with colourful lights. Orchestras played, fireworks often sounded, and light refreshments and cold suppers were served from menus. People could enjoy in supper alcoves, decorated with cont­emp­orary paintings like those of Hogarth. Why Hogarth? Hogarth pro­moted native English artists, like himself, over imported contin­ental tal­ent. Importantly for this topic, Hogarth help­ed to decorate Vaux­hall Gar­dens, giving artists public exposure before art museums arrived.

Graphic Arts noted Thomas Row­land­son's figures were caricatured but ident­if­iable, including Mrs Weichsel singing from the balcony and Mr Barthel­emon leading the orch­estra. Below was a supper party with James Bos­well, Dr Samuel Johns­on, Mrs Thrale and Oliver Goldsmith. We know Boswell did indeed frequent Vauxhall and said “I am a great friend to pubic amusements; for they keep people from vice.” Play wright and columnist Captain Topham was looking through a spyglass at the Duch­ess of Dev­onshire and her sister, Lady Duncannon. At right the Prince of Wales/later George IV flirted with his ex-mistress, actress Perdita Robinson, who remained rather coyly on the arm of her husband.

Other pleasure gardens opened. Marybone Gardens were officially opened as a venue for concerts and other entertainments in 1738 by a tavern owner, although the site had been used as a private pleasure garden since the restoration of the monarchy. Jane Austen’s World said there were at least 200 outdoor pleasure gardens and tea gardens around London by the Edwardian era! Open only for a short season each year, proprietors of the less spectacular gardens had to earn enough income to keep their establishments open and competitive.

"A view of the Or­ches­t­ra with the Band of Music, the Grand Walk &c in Marybone Gardens", engraving from a drawing by J Donowell, 1761.

I greatly enjoyed your posts about the pleasure gardens, Hels. I wish that I could travel back in time and visit one!

There is a little bit about them in a book that I just read. It's called 'Desperate Romantics: The Private Lives of the Pre-Raphaelites'. It's a fascinating book. Your students would just love it, I'm sure.

Viola,
many thanks. I loved quite a lot of Desperate Romantics in film, but have not yet seen the book.

Timing is everything! Since I wrote this post and scheduled it ahead of time, art critic John Mc
Ewen analysed the painting/cartoon Vauxhall Gardens by Thomas Rowlandson. See Country Life, 9th June 2010.

Two Nerdy History Girls have discussed a porcelain punch bowl with images of Vauxhall Gardens and London Foundling Hospital. The Chinese bowl was made in Jingdezhen in c1800 and is now displayed at the Winterthur Museum.