The Nazis, even those who passionately loved art, hated Expression­ism. Expressionistic passion for brilliant and symbolic colour which was more important than the figurative content of the work, infur­iat­ed the Nazis. Nazi art policy was designed to create the outlines of a new German cultural heritage, to eliminate artistic alternatives to the party view. Starting in 1933, the Nazi government began its war against modern art in general, and German modern art in particular.

Why was the Nazi art policy so against the aesthetic avant-garde? They claimed that modern artists were cosmop­olitan, inter­nat­ional, Jewish or Bolshevik, and that these faults were ref­lected in their art: gross, dirty, brutal, confused, incom­plete and nihilistic. Deformed artworks were condemned for their “barb­arous methods of represent­at­ion” as much as their disgust for rel­ig­­ion and preaching of political anarchy. So it was ir­on­ic that Expressionism thrived best in the German speaking countries, from 1910 on. 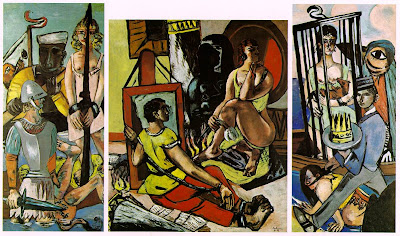 A group of sympathetic art critics in Britain and France, including Roland Penrose, stood up for modern European art. In Paris in 1935 Penrose had already began to discuss with other Britons and with Picasso how they might promote modern art back in Britain. Penrose returned to London, to form the group that organised the International Surrealist Exhibition held at the New Burlington Galleries London in 1936. Comprising 400 works by Dali, Duchamp, Ern­st, Magritte, Miró, Picasso and Brit­ish art­ists, this Surr­eal­ist Exhibition excited huge interest, both supportive and critical.

In Germany, the pur­g­es of modernist art were relentless. Joseph Goeb­bels ordered that once the purging of all of Germany’s public collec­t­ions was done, the art that had been sel­ec­ted out for destruction would be shown to the German people for the last time. A special Ex­hibit­ion of Entartete Kunst/Degenerate Art was planned for 1937 in Munich. Painter Adolf Ziegler, prof­essor at Mun­ich Ac­ademy of Fine Arts, became pres­­ident of the Reich Chamber of Visual Arts under Joseph Goebbels. Ziegler confiscated works for the Entart­ete Kunst Exhibit­ion and in two weeks, he ch­ose 650 works by 112 art­ists, many being Jews or mar­r­ied to Jews. The show ran in Munich from July-Nov 1937.

After the Surrealist Show, the next display of German art in London, called Banned German Art, was organised to protest Munich’s 1937 Deg­enerate Art Show. But before the show opened, the name was changed to the less provocative title, C20th German Art, at the exp­ress command of the British Foreign Ministry. The show was held at the New Burl­ing­­ton Gall­eries London in 1938, and was well attended. 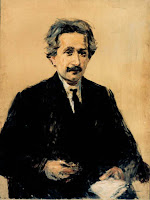 The Chairman of the Organising Commit­tee was art critic Herbert Read. Read’s stated aim for the exhibition was to educate the British pub­lic on the worth of modern German art. But by the time the exhibition opened in 1938, the art world had bec­ome moved on. For the organis­ers, it became more about showing the prog­rammes of cultural desec­ration prac­tised by the Nazi regime, and support­ing artists who had stood against Nazism. Funds raised would go to dist­res­sed exiled artists.

The London show did not include of Grosz’s or Dix’s most ex­treme, subversive works, due to diplomatic appeasement by the Foreign Ministry. But it is clear from the photos that the singer Paul Robeson sang at the opening of the Exhibition, as a benefit for German artists banned by the Nazis. Robeson would have been a very provocative choice for the organisers, as he was black AND very grateful to the Russians, without whom the Allies may not have won the war. 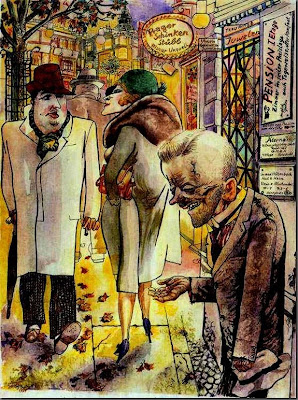 
The London Times wrote five articles on the Exhibition. It was desc­rib­ed as an outstanding exhibition by art critics and although they didn’t sell much art, the show ran throughout July. Then due to its popul­arity, the dates were extended twice until the end of August. I now want to know if the London Exhibition succeeded, or not, in displaying the Nazi prog­ramme of artistic despoliation. I also want to know whether the British organisers DID support the artists who had suffered from Nazi purges, either morally or financially.

Michael Carlson discussed this exhibition (and others) in FLEEING DIRE ENCUMBANCIES: EXILES AND EMIGRES, as did BLOG in "Nazis: a warning from the history of artists".

I'm not sure about the London exhibition, but I know that the nazi exhibition drew huge crowds. The nazis got extremely irritated and embarassed that so much of the German public ended up visiting the exhibition for the wrong reasons. Rather than horrified, many were intrigued and enjoyed the exhibition.

I really, really enjoyed reading this . Some new names to investigate for sure. You write extremely well, more please.