Art deco was a very decorative architectural style popular in many countries from the middle 1920s and throughout the 1930s. But not all deco architecture and design developed identically, across the world. 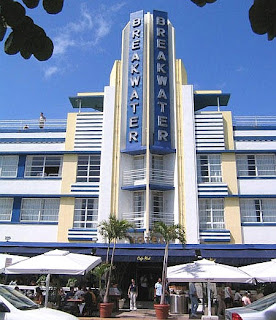 Only the vertical blade was totally familiar to Deco fans. Advertising the name of the hotel in neon letters, Miami's blades could have been taken straight from London cinemas. 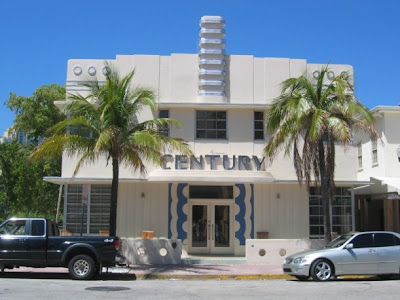 Andrew Wood noted in his Miami Deco blog that by the 1970s, these architectural relics had been reduced to flop houses for winos and seedy last chances for elderlies looking for winter warmth. So how close to the original 1930s buildings are the renovated buildings? Certainly the colour scheme debate still rages, according to Andy.

Martin Belam, when touring Miami's Art Deco district, was more definitive. The original colour schemes of Miami’s buildings in the 1930s would have been white, grey, black and beige. The tropical pastel schemes were originated by a designer called Leonard Horowitz as part of the late 1970s drive to preserve the buildings. See the pastel lemon and creamy orange on the facade of Winter Haven Hotel, for example, which fits right into our time frame: it was designed by Albert A. Anis in 1939. The Majestic Hotel, by the same architect, was only marginly later: 1941.

Sometimes the colours were not pastel at all. Art Deco Buildings showed that the Hotel Clifton was white, as you would expect, but with deep oceanic blue stripes vertically and horizontally. So did the Breakwater and Century Hotels depicted here. 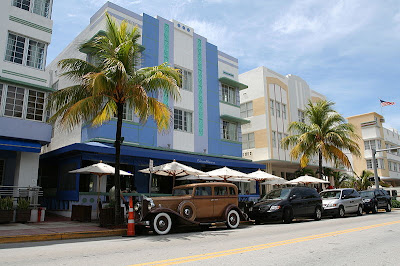 Ocean Drive runs along the shore of South Beach, and although it is a major boulevard in Miami Beach, the Deco hotels were not destroyed in favour of heartless, faceless, modern multinationals. And the Miami Design Preservation League's administrative offices are perfectly located in the Art Deco Welcome Centre in Ocean Drive. In particular, the Miami Design Preservation League sponsors the Art Deco Weekend Festival each year, celebrating the Deco era with tours, lectures and films. I love the idea of presenting public programmes that can explore the influence of inter-war modernity on cinemas, hotels and homes in the area.

I was in Miami last year and saw all the great Art Deco hotels and restaurants and theaters. Well not all, but many : ) Ocean Blvd.'s people are as interesting as the architecture that is for sure!

I hope to visit your blog again.

Lars, Ashley and katknit, thanks for the comments. There is something very special about Miami Beach.

Another lovely example of Deco in Miami, in every aspect except the colour, can be found in http://artdecobuildings.blogspot.com/2011/01/hudson-apartments-miami.html

Great Miami and the Beaches said...

Thank you for adding the Art Deco Weekend Festival. This festival celebrates the National Art Deco Historic District in Miami Beach and has more than 80 programmed events each January.

Great Miami and the Beaches

I was looking at Deco cinemas today and found your festival starts in January. Perfect timing!

Hello Hels, I visited the Miami Deco area when it was already on the upswing--bright pastel colors seem to go naturally with warm climates. I found a great used book shop there where I bought so many books that I had to have them shipped to Ohio!
--Jim

Deco after WW1 was always white or cream, so it was a bit of a risk to choose more attractive pastels in the 1970s renovations. But I think Leonard Horowitz made a good decision; pastels and even stronger colours were much more interesting in hot Miami than in cooler Europe.