Catching a mass murderer in Australia - the Ivan Milat case

Gun culture never seemed to have much of a presence in C20th Aust­ralian history. There were occasional mass shootings in Australia during that era, but the shooters seemed to murder their own family members or rival bikie gangs. They rarely went after random strangers.

Then a rather hideous change occurred in Australian society. Julian Knight killed 19 strangers in the Hoddle St Massacre in Melbourne (1987), Frank Vitkovic killed 8 people in the Queen St Murders in Melbourne (1987) and three mass shootings happened in NSW in 1990, 1991 and 1992. So serious was the crisis that guns were outlawed from private hands straight after Martin Bryant shot 35 people in the Port Arthur Massacre in Tasmania in 1996.

Perhaps the lack of a gun culture was why it was so difficult to even detect The Backpacker Murders in the Belanglo State Forest of New South Wales, only an hour's drive from Sydney. This spate of serial killings occur­r­ed during the early 1990s and may have been carried out by one or two people. The bodies of seven missing young adults (none was older than 22) were eventually discovered partly buried in the state forest between 1992 and 1993. Five of the victims were European backpackers visiting Australia and the others were Australian backpackers from the southern states. Over 300 police officers were assigned to the case. 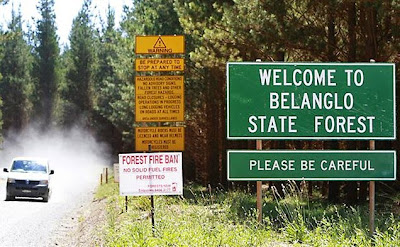 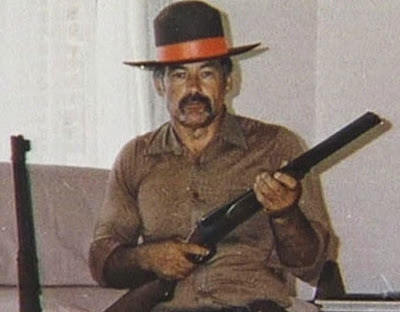 Who would pose with a gun in Australia?

Ivan Milat must have thought he was invincible

Local man Ivan Milat (born 1944) was one of 14 children born to an impoverished migrant family, rural, isolated and gun obsessed. Despite exhibiting psychopathic tendencies from his early teenage years and an active criminal record as an adult, it took a long time to identify Ivan Milat as the Backpacker Murderer. And consider how long it took. In January 1990 the first attempted murder occurred in the state forest, followed by the successful murders, but Milat did not have to appear in court (on robbery and weapon charges) until May 1994!

Milat never confessed to any other crimes. It was only forensic evidence that could link Milat to the gruesome and violent killing of the hitchhikers — he used hunting knives, ropes, cloth gags and a collection of legal and illegal firearms to brutalise and subdue his prey.

Following continued police investigations, Milat was finally charged with the murders of the seven backpackers. In March 1996, the murder trials opened and he was eventually convicted. Today Milat is serving seven consecutive life sentences.

Police have always suspected there were other victims in the early 1990s that have not yet been located. What they did not know was that Ivan Milat shot a Sydney taxi driver and paralysed him in 1962. As one of the Milat brothers told the police, Ivan was only 17 at the time. According to The West Australian, the discovery reveals a new victim and a path of brutal criminality that began long before anyone suspected.

Although docu-dramas usually irritate me because they exag­g­erate the “real” characters for dramatic effect, I very much wanted to watch Catching Milat on tv. Catching Milat (played by Mal Kennard) tells the story of how the NSW Police Taskforce, and in particular Detective Paul Gordon (played by Richard Cawthorne), tracked down and caught the man responsible for the infamous Backpacker Murders. Yes the Milat family members were dysfunctional, the public terrorised, the computers primitive and the police not always successful, but it was the process that was so fascinating. This real live case gripped the nation back in the early 1990s and, due to its backpacker victims, attracted fearful international headlines. Now in May 2015, the case is gripping the nation once again.

The second half of the Catching Milat miniseries will screen on the Seven Network on Sunday 24th May 2015.

The reason I remember Port Arthur, Queen St and Hoddle St so well is because the murders were in a small geographic space and in a very short burst. Total nIghtmare.

Belanglo Forest murders were in an enornous space, virtually hidden and spread over years. The scary impact was gradual.

Police have said that there were more than 30 backpackers who went missing before Milat was captured, possibly killed by him. Their parents back in Germany, Britain and other countries will never know. But that is the point.

Martin Bryant and the others had one psychotic episode (if that is what it was). Ivan Milat was brutal, evil and hidden for decades.

I didn't think I would like the tv show, so I didn't watch it, especially as it was on commercial tv. The evilness of what Bryant, Knight and Vitkovic did is far surpassed by cold calculation of Milat.

I don't understand why private gun ownership was not banned as soon as possible after the 1987 massacres. It might not have stopped Ivan Milat's range of weapons, but it certainly would have prevented the 1996 Port Arthur Massacre in Tasmania.

Hels, This is a horrifying story, and I don't think that one drop of pity or extenuating circumstances can be dredged up for Milat. However, I am not sure if no-gun laws would really do much good for this particular type of insanity, because Milat used other weapons as well to terrorize his victims. In general, I think it an excellent idea to get rid of guns. Taiwan has no guns, and its crime rate is very low.

I felt exactly the same way. But do watch the programme, at least the second half. If it is possible to say that we as a nation lost our innocence, it happened between 1987 and 1996.

you are totally correct, but then hindsight is almost always accurate. The polls in 1996 showed that 90% of those surveyed supported a total and permanent ban on all automatic and semi-automatic firearms, and the vast majority of citizens (?75%) supported bans on all guns.

Needless to say that since the gun bans, the only mass murders have been the Churchill Fire (2009), the Quakers Hill Nursing Home Fire (2011) and Cairns stabbings (2014). No guns were involved.

True. Ivan Milat worked on country roads in New South Wales, in and beyond the isolated state forest. His history was of rape, guns, knives and clubs, and he was never spontaneous in his crimes, or unprepared.

I cannot find when Taiwan's gun laws improved, but I wish Australia's had before 1996-7.

I like it this blog information, thanks for sharing

I am glad you enjoyed the post, but I don't allow advertising

Serial killer Ivan Milat filed appeal after appeal with the NSW Supreme Court. Milat, who has obsessively pursued a campaign to prove his innocence, wants the court to review his 1996 trial and conviction, saying it was "unsafe" and "flawed in law".

Each appeal so far has been rejected.

The teenage nephew of serial killer Ivan Milat was sentenced to at least 30 years gaol for the 2010 axe murder in the same grim forest where his uncle slaughtered seven backpackers. The axe crashed onto the head of his childhood friend David Auchterlonie in the same Belanglo State Forest, south of Sydney.

Matthew Milat's accomplice in the cold-blooded murder was sentenced to at least 22 years behind bars.